In one of my last posts, I reflected on the fact that this depression has been clinging to me for a year now. To commemorate this ‘anniversary’ I would like to share some of my first journal entries with you. I started journalling back in March when I was a psychiatric inpatient. After being in group therapy all day, I found it helped me avoid ending up with a head full of jumbled thoughts every evening.

The material in these pages is often dark, particularly as I was having a lot of suicidal thoughts and often failing to fight the urge to cut myself. One of the first things I wrote in my journal was about self-harm.

When admitted to the hospital, my belongings were thoroughly searched and anything potentially dangerous was removed. This included all cables and belts, not that there was anything to hang yourself from. Being resourceful, I realised that if I smashed the bulb in my table lamp, I would have something sharp to cut myself with. This felt like a victory. In a childish way, I delighted in the fact that I had I defeated my ‘oppressors’ and I kept the shards of glass wrapped up and hidden in case I needed them again. 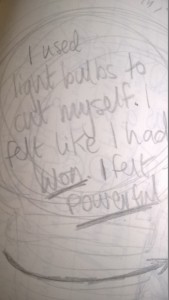 As a result of this small triumph, the lamps were removed from my room. I then had to sink as low as stealing light bulbs from my friends’ rooms. That felt desperate and dirty. Eventually I ran out of options, and I was put on constant observation (1:1 nursing). But even then I managed to outsmart them, using my key to unscrew a picture frame in the toilet. She wasn’t expecting that! By this point, the staff’s inept attempts at keeping me safe were becoming a running joke among my friends.

A good friend of mine (and fellow self-harmer) had managed to walk to the chemist in the village, purchase a bag of razor blades and walk straight into the hospital with them unnoticed. The same happened when I visited a hardware store. I put several packs of Stanley blades spread around my pockets, but nobody even asked me if I was safe.

It very much took the staff by surprise when myself and this friend declared an ‘amnesty’; knocking on the office door and being greeted by a speechless nurse as we held out our hands full of contraband.